The only place outside Heaven where you can be perfectly safe from all the dangers and perturbations of love is Hell.' — C.S. Lewis 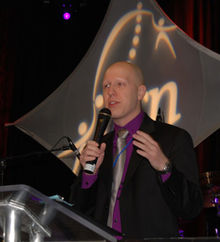 Michael is growing up in an evangelical church. His parents are devoted and loving parents. At the age of 11, when his soccer buddies are beginning to talk about the cute girls, Michael is secretly finding out that he is attracted to the other boys. But, he goes to a “good” church which has taken a stand against the evils of homosexuality.

Michael understands that what he feels is wrong so he tries to overcome it. The last thing he will do is tell his youth leader or parents because they preach regularly on the evils of homosexuality. So, Michael hides his secret. He hears about pastors who believe that people who feel the way that he does should be rounded up and jailed. One pastor even said to beat the homosexuality out of any kid who has that tendency.

Michael becomes depressed and feels life is hopeless. He considers suicide or just turning his back on God.

Michael is fictional-his story is not. It is replayed over and over again in many churches. What do we do and how do we do it? And I mean we. We are a community of believers and no one person should ever be  a lone ranger.

I fully expect to irritate everyone with my plan. I’ll probably even be mad at myself by the time I am finished. I am going to shamelessly rip of Rachel Held Evans’ idea.  Here is a link to Ask a Gay Christian. I urge you to read it because, on Thursday, I will be interviewing Justin Lee of the Gay Christian network here.

I discussed Justin’s interview with Evans with some dear friends. They were excited and said they knew him and that he lived here in Raleigh! Their son played with Justin when they were young and, lo and behold, we all attended the same Baptist church! They urged me to give him a call because they knew he would be willing to dialog with me.

I do not believe in coincidences. So, once again believing that God is directing my path, I gave him a call. I was just informed he has granted my request for an interview this coming Thursday, right here in Raleigh!

So, instead of giving up blogging and sitting on my back deck staring at my bluebirds, I once again throw myself into the melee. I am sure that some of you are picking yourselves off the floor, wondering if Dee just went off the deep end after last week’s rather intense “pedophile” incident.

It is important to realize that I am a bit more conservative than Evans. However, several weeks ago, on another well-known blog, a reader brought up a question about how people who consider themselves gay were treated by a certain family of churches. The blog editor shut down the dialog and said that “homosexuality” would NOT be discussed on that blog.

Why, I wondered? Is the subject so painful that Christians of good will cannot discuss it without ending up mad at each other? And then it hit me right between the eyes! We don’t talk about it because it is so hard. We muddle on, trying to figure it on our own. We see protests at Chick Fil A or hear quiet whispers of little Michael who just came out of the closet. We blow it off  but are vaguely disquieted. We simply say “Homosexuality is wrong” and promptly forget that there are hurting people, real parents and kids, friends and family, confused, quietly trying to figure it out on their own. This is a painful topic.

We ignore the issue and tell out children not to call someone “gay”, silently relieved that it wasn’t our kid who was so named because, of course, we are all wonderful parents who knew how to prevent this.

Unlike Rachel Held Evans, however, I am more conservative. This makes the discussion all the more difficult. How do I do this in such a way that shows love and kindness while at the same time accepting my own understanding of the Scripture surrounding this issue? It seems nigh on impossible. But, if I can’t do it, how will others?  Are we to remain silent, like ships passing in the night, or do we lay it out on the table, trusting our Father to smooth the way?

I have approached this issue, desperately seeking a way out for me. I think I have an action plan. However, for you dear readers, as this series goes on, please refer back to this sentence if you start getting antsy. Anyone who tries to say I believe otherwise is lying. I wish I could find a way around the Scripture in this matter but, alas, I cannot.

I believe that the homosexual act is sin. (Repeat x3)

However, I want to invent a new sub-category for our Prime Directive. I want us to be able to understand and empathize with the struggles of those who have Same Sex Attraction(SSA).  In fact, that will be my focus in next week. In other words, how does the church minister to and support those who have SSA? Frankly, it is far easier to go rebuild houses in new Orleans or volunteer at an orphanage than to face this issue. It is messy and causes much tension. But, it is a major issue for this generation.

Let me make an observation. It seems to me that some in the church handle pedophiles with more compassion than homosexuals.

How many people with SSA are there?

There are many numbers floating around out there. However, one of the more conservative estimates is found here.

“Gates is demographer-in-residence at the Williams Institute on Sexual Orientation Law and Public Policy, a think tank based at the University of California, Los Angeles."

If today’s population in the US is about 314 million, that means approximately 27.5 million fit these categories. This constitutes about 8.8% of the population.

Folks, that means we all probably have contact, on a daily basis, with those who have some form of SSA. In my own life, I have one uncle who is gay and have had several friends who fit this category.

I have received permission to reprint the Great Debate from the Gay Christian Network. This debate pits a celibate homosexual against Justin who takes the perspective that a gay Christian must be celibate until marriage and monogamous thereafter. Both use Scripture to back up their point of view.

Before you start writing me frantic emails, let me explain my reasons for doing this. Many people do not understand how someone can make the argument for monogamous gay marriage. I think our readers might find his thoughts informative. This does not mean I agree with him. (Reread this 3 times).

Justin is a kind man who is very patient and will not come off as strident. That is not the case for many proponents on either side of the argument. Also, unlike some homosexuals, Justin takes a more nuanced approach and does not support a culture of multiple hookups.

I would ask that people treat him like a guest in our home. Also, it is imperative to take into consideration that he has fully considered the Scriptures pertaining to this subject. So, it would be great if we can up the level of the discussion and not talk down to him. I am startled he would be willing to take me on!

In order to facilitate the discussion, I will first present the Great Debate which will take 2 days. We will begin it either on Friday or Monday. Then, I will present our discussion along with your questions and answers. Finally, I will tackle some of the loose ends. If I am not fatally wounded at this juncture, we will move on to new topics.

However, I want to go in a bit of a different direction with him. I am more concerned about how he felt growing up, how his parents and fellow Christians treated him prior to and after “coming out.” I am hoping he will be able to articulate the assistance he received (or did not receive).

I am also asking our readers to submit questions in the comment section of this post. I will try to get as many answers as possible. Is there something you have always wanted to ask a gay Christian but have felt insecure and uncomfortable. Here is your chance.

Lots and lots of questions

On my part, I wanted to list some thoughts and questions that I have about this subject, entirely separate from my coming conversation with Justin.

Recently, Jonathan Merritt, a well-known Christian culture writer and son of prominent SBC President, James Merritt was outed by a blogger with whom he had a one night stand. He admitted to the encounter here.

“Merritt told Stetzer that he does not identify himself as gay “because “I believe there can be a difference between what one experiences and the life that God offers.” He said he remains “committed to living the life God demands for those who follow him,” including “the Bible's unambiguous standards for sexuality.”

Is he just another Christian hypocrite or could he be the key to beginning to think through how the church approaches this painful subject?

CS Lewis on marriage:
Please ponder the following quote from CS Lewis over the next week until we pick up this hot potato once again.

Before leaving the question of divorce, I should like to distinguish two things which are very often confused. The Christian conception of marriage is one: the other is the quite different question — how far Christians, if they are voters or Members of Parliament, ought to try to force their views of marriage on the rest of the community by embodying them in the divorce laws.
A great many people seem to think that if you are a Christian yourself you should try to make divorce difficult for every one. I do not think that. At least I know I should be very angry if the Mahommedans tried to prevent the rest of us from drinking wine. My own view is that the Churches should frankly recognise that the majority of the British people are not Christians and, therefore, cannot be expected to live Christian lives.